Here’s my gun for the EBR big bore 200 yard event. Yes, it’s just pixels, no better than vaporware at the moment.

I should be able to shoot a full card on a charge with a little air to spare if I did the math correctly.

Yes, it’s a hybrid bullpup because I’m sure I don’t have time to get the action in a conventional stock.

With only 10 days left there is a lot of work to do LOL! I’ll be updating this post daily with progress, make sure to come back to see how she’s shaping up. 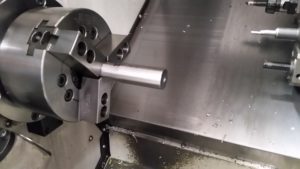 Tuesday yielded zero progress although today was very fruitful. I started with the barrel fitting, machining it to mate with the Slayer upper. The first step was chuck the breech end of the barrel in the lathe. In this case a Daewoo turning center, but there are other options available (click here to view more). Because the barrel was so long at 30″ it had to be inserted through the tailstock with the chuck jaws removed allow the larger breech end diameter to pass through the chuck. 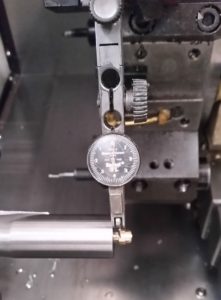 Now that the barrel was chucked in the lathe it was time to make sure the bore was running concentric to the outer diameter. I’ve never found a barrel yet that didn’t have some amount of runout. To check the runout I machined a plug gauge to a perfect fit in the bore and used a dial indicator to check the runout In this case the runout was just under 0.003″, close but not good enough for a bench gun. Using writing paper as shims I added 0ne layer to two of the jaws and piece of tissue paper under another jaw to bring the runout to 0.0002″. That’s more like it.

After about 1 hour of setup and 3 minutes of runtime a finished breech manifests itself. 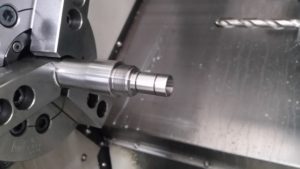 The next step was to turn the barrel around and cut the target style rebated crown. The barrel still need the transfer port cut and the throat reamed to accept the slug. The Transfer port will be cut on a mill and the reaming is best done a manual lathe. A job for another day. 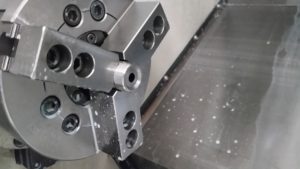 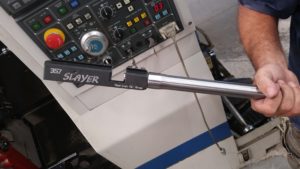 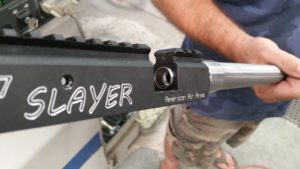 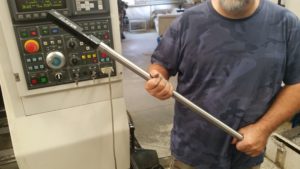 This will be a long gun 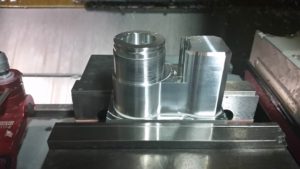 The drop down bottle adapter is made from 7075 FORTAL plate. FORTAL is a very high strength aluminum used mainly in the injection molding industry, many times it is generically referred to as “mold plate”. The advantages of FORTAL are many but most important is strength which is roughly double of mild steel and its stability during the machining process. Whether you’re using a 2-axis machine or a 5 axis cnc machining tool, the parts from FORTAL almost never warp or twist. The first milling removes most of the material revealing the net shape of the part. The threaded section that mates with the tube are “thead milled” allowing the part to be made as one piece instead of using a separate threaded nipple.

Next the parts are indexed and located for the cross drilling operation. 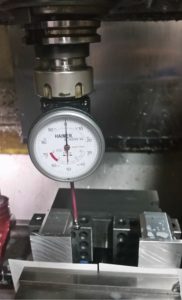 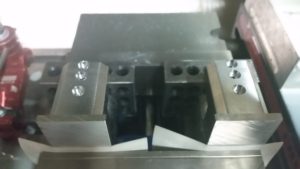